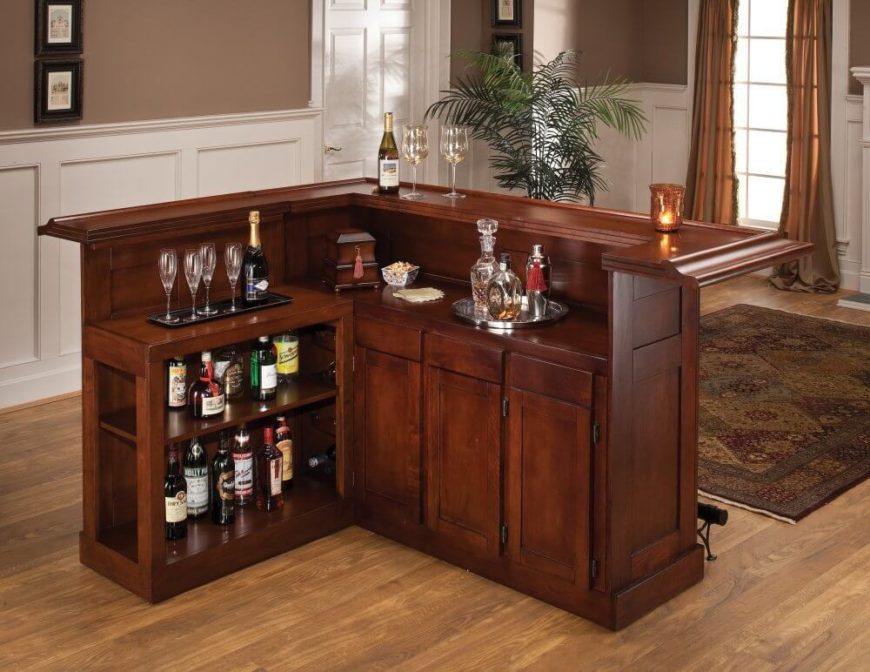 Setting Up Your Home Bar And More!!!

Was speaking to a newly wedded couple a few days ago, who had just moved into their Townhouse, who were tossing around and asking decorating ideas.
The wife wanted the minimalist look as she said she, ‘did not want to crowd the place with Furniture, to get in the way of the ‘Children’, when it was their time to join the family’.
Novel idea I thought, but as I continued listening to her, it was becoming increasingly clear that when it came to decorating their new place, there would be a clash of styles and expectations.

To begin with, he wanted a ‘Mancave’ out of what was a cozy anti-room and she wanted A ‘Den’ that she later reidentified as a ‘Family-room’ where they could both chill.
Now, these are two very sociable individuals, she a wine-drinker and he a lover of ‘Singlemalt’, and both are young professionals, who really enjoy entertaining…
On thinking about this, I suggested that maybe a “Bar”, might be a better investment for them, as this is a space they could both enjoy and also share with friends.
Well, he warmed to the idea, but she was dismissive, and so I left them alone, to find their own salvation. But before I did, I said to her, from my perspective, I believe the bar would be a great compromise because in the end, instead of staying out late to drink with friends after work, the home bar, might make him come home, with a few friends, and so you would have more community time together instead of him being out on the town.
Imagine my surprise, when a few days later, she called, ‘splainin’ that they had indeed talked it over and she (they) had decided on putting in a home-bar, and wanted to know, if it was an expensive prospect?
Well, it was her turn to be surprised when I told her that the idea of a bar, did not necessarily include Cabinets, Shelving, Sinks and an icemaker and or new glassware, as what was important, was a designated area for Liquor and a place where they could congregate to imbibe…
She still wasn’t quite sure how that would work, so I shared with her a few pointers. Some of which I reproduce here, for the benefit of this article.

A home-bar need not rob you of living or entertainment space but should enhance both. To achieve this, the minimalist approach is indeed best. And when done properly, the bar not only becomes a focal point of your entertainment/living areas, it can be a conversation starter.

So, your home bar need not be a replica of the one at your favourite ‘watering-hole’, for functionality, the physical bar itself, can be a Bistro table, dressed for this purpose; a designated side of your kitchen counter-top or a table tucked away from accidents, but stocked appropriately with your basic requirements.
Now those basic requirements are to taste, but they should include:

Proper Glassware: A connoisseur or afficionado cannot enjoy a dignified drink, without proper glassware, so know your glassware and put them in place. This can be done intime, so no need to rush out in a spending spree. In an emergency, any Glass will do, and even the Connoisseur will forgo standing on ceremony to share libations with friends, but it is way more attractive for a Margarita, to be served in a Margarita Glass, than in anything else. So, a suitable collection should include Rock-glasses, Red and White Wine-Glasses, Snifters, Flutes, and some sturdy ones for the Mixes And Non-alcoholic Coolers.

Bar-Tools And Garnishes: In addition to Glassware your bar should include: a Blender, an ice-bucket, a mini-cooler, tongs, bottle-opener, wine-opener, napkins (Cloth and Paper) a measure; stirrers, and some lemons/limes and other fruits for garnishing (Grapefruit, Oranges, A sprig of Rosemary or Cilantro – Both add flavour and scream creative elegance, and thus making the drink, that much more appealing and appreciated.

Stock: You basic stock should include: Red and White Rum; Red and White Wine; At Least Two Bottles of Prosecco or Other Bubbly; Gin, Vodka; A Sherry; A Brandy; A Variety Of Scotch; and some Beers; Standard Chasers (Cola, Tonic, Ginger-ale, Some Fruit Juice or Coconut Water, for the teetotaller, and some Bitters.
Now, having set the stage with the basics, it’s up to you, the host, to create that WoW-Factor, with your skills as an amateur mixologist.
But here are a few serving tips to enhance the experience: A Very popular and common mistake made in the Tropics, is the idea that Red-wine, should be served at “Room-Temperature”. This is Nonsense, and should be avoided by sensible hosts.
The notion of serving Red-Wine at Room-Temperature originated in old wine Country in Europe, where wine was stored in a dank and cold cellar, and when it was brought up from the ‘Cellar’ for consumption was then allowed a ‘breather’ to reach room-temperature, where it was easier on the palate.
Consuming Red-wine at ‘Room-Temperature’ here in the tropics, is just another piece of imported ignorance. The best way to consume red-wine here is, to first store it in a cool place, say a wine-cooler or the crisper of your refrigerator, where the moderated temperature of the Cooler, takes off the acidic edge off the wine and thus making it easier on the palate.
Opening A bottle of Champagne or other Sparkling, can be tricky, in that sometimes this simple process have been known to cause accidents. To avoid this, its best to use a cloth napkin to help with the uncorking. THis you do by removing Cork-fastener, then firmly grasp bottle, and with the bottle pointing away from you and your guests, slowly turn the bottle clock or counter-clockwise, until the cork springs free.
If you garnish a drink for a guest, and this guest eats the Garnish, (some do) and then go on to use the Toothpick that was used to hold the garnish as a fashion accessory, as soon as you see this, get a paper napkin and give to offending guest and ask that the toothpick be disposed of immediately.
A Toothpick is not a fashion accessory and should not be dangling from the lips and or fingers of guests, who are still mingling with others. This is not only gauche, its very unhygienic and should never be encouraged!
Monitor your guests and be the sober one in the room, so you are always mindful of just how much your guests have consumed. You do this to preserve life and limb and should feel free to stage an intervention when you think a guest has had enough by substituting liquor for softer beverages.
Fine Brandies, were intended to crown a meal, and thus were usually taken after dinner; they were also served to someone suffering from, the chills or coming in from inclement weather. Things and times have changed but try and resist serving your fine Brandy to those who think they feign sophistication when they order a high-end drink, but ask that it be ‘Chased’…Whether the Chaser be a Cola Or Fruit-juice, it does not matter, those ordering ‘Hennessey ‘N’ Red-Bull’ are not worthy of your Henny, and should not be encouraged.
In fact, there is a story of the late Fashion Designer, Thomas Garwood, Inviting a few friends over for drinks one afternoon, and one guest of a guest, feeling haughty proceeded to ask for a Courvoisier when asked what he would like to drink
Not missing a beat and being fully cognizant of the situation, Garwood’s response has earned him the status of Legend, as his reply was: “Have you had dinner yet dear…. Let me get you a Gin and Tonic. Till then!”
You could have heard a feather drop, for the first 10 or so seconds, following the encounter…But it was a Teachable moment that was grasped and fully utilised…
Now that we have set up that bar, Cheers, to the good-times and camaraderie, it will bring…And remember, when faced with feigned sophistication, shoot it down, but gently as times do not change, but social-constructs do…So be prepared.