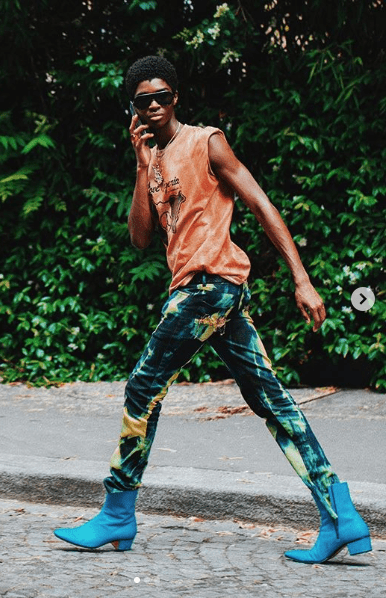 He is just 22, but Alton Mason, has been around the Fashion Globe, so many times, thinking about it, just makes your head spin.

Surprisingly, he is also the First Black Male Model, to walk for Chanel, the Fashion House that the late Karl Lagerfeld, built.

Not surprisingly Alton Mason is the hottest global male model phenom to walk the international catwalks in decades, as this young and spunky and hip Arizonian born Scorpio, who celebrates his birthday on the 21st Of November, has been turning heads, since high school, with laconic ease and effortless model-magma, as he is said to move with the purpose of a Lion, with the Grace of the Gazelle.

Scouted on Instagram, Mason has worked as A Dancer, (he performed with Puff Daddy) before getting his big break which landed him gigs for fashion houses such as: Gucci, Hugo Boss, Versace, Fenty x Puma, Michael Kors, Philipp Plein, Jeremy Scott, Tom Ford, Valentino, Fendi, Karl Lagerfeld, and Louis Vuitton. But is noted for making his debut at Kanye West’s Yeezy Season 3 show, at Madison Square Gardens, after which he picked up jobs with NY Brands such as  Eckhaus Latta and Telfar, his hallelujah moment came when he was cast by Gucci for AW17 that marked his first major runway triumph!

Since then Mason has gone on to scorch runways in every fashion capital of the globe, at times, utilizing his dance skills along the way to wow fans and thrill designers as he’s walked shows as diverse as Ann Demeulemeester and Fenty x Puma, with his fab-forward personality.

Today he is not only regarded as one of the world’s hottest and natural Models, he’s considered by industry bloggers and arbiters, as one of the Best Dressed Male Models anywhere, “pulling off everything from logo-covered Balenciaga to python loafers and flares”.

Well, the industry word is that Alton Mason is expected to touchdown in Kingston Jamaica, next year, for at least one major Fashion engagement, so stay tuned!